Great, my mind is ruined. Just what I needed as I woke up this morning. I blame my current lack of attentive brain cells on the internet. Nothing is a mystery anymore. The childlike curiosity no longer drives one to begin careers or deep, in-depth study in order to solve mysteries. Now it’s just a quick trip over to a computer with internet access and suddenly you find out everything from the location of Lincoln’s Catafalque to the fact that an angry Disney animator included a breast shot in The Rescuers. Great, I’ve lost you guys. I’ll wait until you click back to me after you look at the coffin carrier and the breasts. 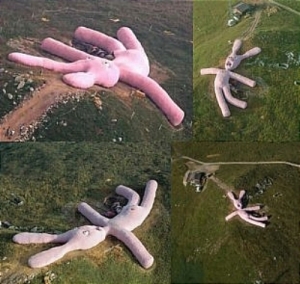 Back? Good. Anyway, like I was saying, there are no mysteries anymore. Did you know that there is a pink bunny in Italy that is huge and fluffy and…real? Just head over to Google Earth and you can see it yourself.  Do you wonder if your neighbor has built some sort of pyramid upon which he conducts ritual sacrifices in his backyard but can’t see over the fence? Well, you can use Google Earth and see that it’s just a pool and he didn’t want you to see him getting sun on his fat butt…equally as scary as the human sacrifice idea, but slightly less likely in terms of successful prosecution.
Did you just watch a movie and you could swear you recognize that set location? Just go to Internet Movie DataBase (or IMDB) and find out yes, the scene was filmed at your college during that day you got really drunk and passed out in your bed. Are you stuck at a certain point in a video game and swear that there is a problem with the game or the console or both? Just go to the internet and get expert advice and walkthroughs from 12-year-old kids that can run laps around you in terms of gaming…and probably anything else. Upset at something you hear, see, or read about? Simply write a blog about it and dispense your lack of wisdom on self-respecting people who don’t give a darn about your mindless babble…ahem.

There was actually a time when one had to wait a full day or at least until 11 pm in order to find out what was happening. People would wake up, go outside (that’s a place that has a full-fledged ecosystem that does not include microwavable burritos or frozen pizza on the food chain, and is lit by an actual star…no kidding, seriously) and retrieve a newspaper or watch a pre-scheduled news presentation on TV. Nowadays one just has to be near one’s wireless device and if there is a government overthrown in the Middle East, or if a Kardashian tears a cuticle, the news is delivered instantly and without any sort of hesitation.

We’ve come a long way and I, as a lazy sort of guy, am happy for it. Granted my mind no longer functions on a sufficient level to locate Walldo in a book (a book is like a tablet only with very limited and very linear information, but with incredibly fast load times) but am able to pick out a Wilhelm Scream in any movie, television show, or video game. Go check it out…I’ll be here waiting for you. Just be sure to …