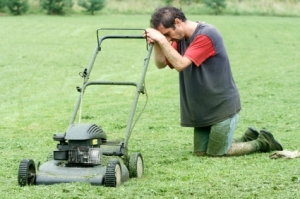 Oh yes sir, it is springtime in the ‘ol Northern Virginia area…and presumably other locations as well, but I don’t wish to speak for the current status of the climate for your areas, that would be overly presumptuous. It is the time when I start to get the lawn care gear out, get it ship shape and ready to go. The time when I am able to use machinery to cut grass and it is the time I wherein I am able to throw ridiculous amounts of money at stores to equip me with the Holy Horticultural Handtools necessary to combat weeds and associate menaces to my spring chores. Coincidentally it is the time where by wife tries to up the life insurance on me…coincidence?

Whatever picture you may have in your rapidly expanding minds about what I should look like while doing yard work needs some clarification. Aside from being socially awkward 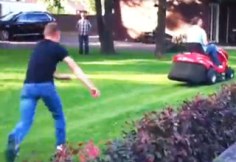 rd, I am outdoorsically awkward (that’s right, I just made up a new word. I can do that. Ain’t it grand?). Seeing me remove, empty and replace the lawn clippings attachment to my mower takes no less than four movements that would probably resemble a ballerina in the grips of a terrible epileptic seizure, flying gloves and dust, and many, many curse words.

I don’t have an impressively large yard, certainly not the size of a yard that would qualify me to use FarmersOnly.com (have you noticed, by the way, that the all of the animals in that commercial have a perpetual look of concern? Not sayin’ nothin’), but a yard just big enough to cause me to rethink my step on the evolutionary ladder. I rarely have trouble mowing the back yard, it’s flat and almost fully without trees, so I mow that first to give me some confidence. After completing the back yard in only twenty minutes (mowing only…I am not legally allowed to trim using a weedwacker…something about court order resulting from an incident with a weedwacker, a poodle, an old lady with a hairnet, and a popsicle stick), I prepare myself for the front yard attack.

I open the gate and enter the front yard and I’ve got the sound of Hulk Hogan’s entrance music in my head. Oh yes, this front yard has met its match. Game Over! I start talking to my mower like I’m Peyton Manning and I’m talking to my team in the huddle. “Alright, listen up mower, we’re going to go under the 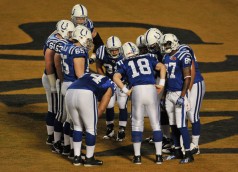 tree, around the bush and alongside of the walkway. Oh, and Better Ingredients, Better Pizza, Papa Johns. Break!” Of course I forget that I’m now in the front yard and all of my neighbors are out doing their on yard and see me talking, indeed inspiring, the inanimate object that is my mower. Oh well, they know I’m crazy anyway.

I crank on that lawn mower and I’m off! First order of business is the path towards the front door. Of course, it’s uneven but I had forgotten about that since last year. Hey, I forgot I put pebbles between the large slabs of rock last year. Oops, the mower blade just took some of those pebbles and threw them up again our front windows. Well, we wanted new glass there anyway.

Next up? Ah yes, the azalea bush. Go around it…right…not a problem. But hey, I can get a little closer, yes? I inch closer and closer to the trunk of the bush, but horribly misjudge the clearance necessary to avoid hitting the branches connected to the trunk. Oh my, how nice, a family of hornets have decided to declare their domicile within the bush. They are angry.

So I’m running (while still pushing the mower for some reason) I am able to avoid the majority of stings, but I have suffered greatly from not only a small collection of stings in various places on my body but also a nasty twisted ankle from my panicking and screaming like a little girl. Well heck, might as well finish the job…the tree. First branch, I duck under it…no problem. Second branch? Not too bad…only hit the top of my head. Almost to the third and final branch. Limping along and feeling the stings starting to swell, I move awkwardly to avoid the third branch and complete the job. My back goes out. Down goes Fraser! Well, down goes Alan. My back starts to spasm and my ankle hurts and the stings are starting to itch. There I lie unable to move right under the cursed tree of doom.

Time to heal up so I can at least…