In an age where we fawn over firefighters, police and military personnel, sometime we neglect to give enough recognition to those people who choose to be in sucky professions for the public good.  I mean, when was the last time you ran out of your house and gave the garbage man a hug, huh? I mean he or she works hard, does his job and goes home to his family just like the rest of us.  Do you see him being given standing ovations at kids’ career days? Nah, just does his job and bless him for that.

The same goes for a profession from which I needed a service recently, Dentists.  There I was, crying like a baby, writhing in pain, anguishing in agony and longing for death…a bit melodramatic? To paraphrase the immortal philosopher Bugs Bunny, “You don’t know me very well, do you?” My wife, who is the smart one, decided that perhaps I should visit someone who has been medically trained to heal the situation rather than just complaining about it and not actually doing anything to correct the situation. Well, heck, first time for everything.

It should be noted that I am extremely terrified of dentists. I realize that this isn’t a unique opinion and that others have the same irrational fear, and for that reason these dentists deserve respect for willingly choosing a profession that will draw ire and discontentment from certain portions of the populous.  Then again, if they are true sadists that enjoy watching people cower in fear and also enjoy poking people with sharp implements, well, good choice I guess.  So I took my wife’s advice and showed up at the dentists…awaiting my doom.

The initial few minutes of the exam were pretty standard.  The nice lady with the clipboard and a few instruments of torture was supposed to ask me how often I brushed and flossed and I was supposed to lie to the best of my ability. Right…done.  Now we get to do some (count ‘em 16!) x-rays. So I first don a flak jacket from WW2, then the assistant puts a device in my mouth and I am told to bite down (using my teeth that really hurt, otherwise I would not be there) on the instrument designed to provide torture and frame the teeth for the best angle of x-ray machine. Right…done. 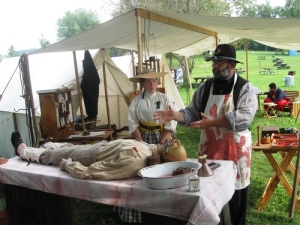 Now comes the time when the dentist tells me that he looked at my teeth and that it wasn’t good. Apparently years of dental neglect and avoidance of dentists has had a negative impact on my teeth. Who knew?! Now, it had been a while since my last dentist appointment…I believe the Earth had just cooled and my distant relatives were just crawling out of the primordial ooze…so the technology had changed. No longer was a civil war bullet used to bite down upon while a dentist using a saw to remove part of ones jaw for a minor toothache.  No longer was an ‘automatic drill’ simple a wooden device hooked up to a big wheel upon which sat a child rotating pedals with his feet to generate power.  Again…who knew?!

Well, the dentist found the problem, God (Buddha, the Maker, Fisher Price…whomever) had given me teeth in the first place, which was the crucial mistake. So this kind dentist and his assistants and hygienists alleviated the pain and put in place an action plan to keep me away from them (which admittedly should be the overall goal).  But it is these people that I salute because they purposely pursued this profession.  This was not some drunken decision one night that turned into a couple of months of training then being release into the populous. No, this was their choice.  And despite my overall penchant for complaining, thank goodness they did.

So go forth, Dr. Giggles and…